Warmer weather is coming and, along with it, the chance to take part of that TBR pile outside to read in a comfy deck chair or porch swing. This month’s list provides an excuse to add to your outdoor leisure time. 🙂

The Postcard by Laura V. Hilton — David Lapp moves to Jamesport for a fresh start after surviving a “code blue” when he was in a buggy/semi truck accident. His new call to the ministry is complicated by his lingering mobility problems, the Amish church, and a postcard friendship with Jamesport local Rachel Miller. (Contemporary Romance from Whitaker House)

Pesto and Potholes by Susan M. Baganz — Renata Blake trades her abusive past for a new home and church family in Milwaukee, not expecting her attraction to handsome chef and Packer fanatic, Antonio DeLuca. Tony has been burned by love and is too busy to let a woman in his life again. With God’s help, and the support of a faith community, will Tony and Renata learn to love again? (Contemporary Romance from Inspired [Prism Book Group])

Together With You by Victoria Bylin — An agnostic, Dr. Ryan Tremaine loses his heart to his children’s god-fearing nanny in this modern twist on The Sound of Music. (Contemporary Romance from Bethany House [Baker Publishing Group])

Coast Guard Courtship by Lisa Carter — Coast Guard Officer Braeden Scott’s wants freedom and adventure, not assignment to a tiny Virginia coastal village-until a feisty redhead puts charm back into small-town life. Amelia Duer is all about home and hearth and caring for her nephew. As Braeden spends more time with her and the boy, his hopes for a family begin to resurface. Could Amelia be the anchor this charming Coastie needs to stop wandering and create a home for good? (Contemporary Romance from Love Inspired [Harlequin])

Pinky Promise by Valerie Comer –– Kelly Bryant’s young daughter wants a daddy and sets her sights on her new best friend’s single father. The man may be charming, sweet, and a believer, but Kelly is embarrassed. She extracts a pinky promise from her six-year-old to stop proposing to men on her behalf. Ian Tomlinson isn’t looking for a wife but does need care for his daughter during spring break the week after his move to Riverbend. He hates to ask Kelly – and plant ideas in the girls’ minds – but he’s rather low on options. How can two single parents fall in love for real with a pair of mini-matchmakers pushing from both sides – pinky promises or not? (Contemporary Romance, Independently Published)

Like a Love Song by Camille Eide — Susan Quinn, a social worker turned surrogate mom to foster teens, fights to save the group home she’s worked hard to build. But now, she faces a dwindling staff, foreclosure, and old heartaches that won’t stay buried. Her only hope lies with the last person she’d ever turn to-a brawny handyman with a guitar, a questionable past, and a God he keeps calling Father. (Contemporary Romance, Independently Published)

Island Refuge by Kimberly Rose Johnson — A five star chef running from a broken engagement takes a job as a cook and housekeeper at a B&B on a small island off the coast of Washington state. There she meet’s Dr. Nick Jackson, the new owner of the Wildflower B&B. (Contemporary Romance from Mountain Brook, INC.)

Dating the Best Man by Gail Sattler — Cory Bellanger wants to be more than just a friend to his best friend’s sister, Daphne Carruthers, but first he needs to come to terms with her painful past and earn her trust. (Contemporary Romance from Love Inspired [Harlequin])

From the Start by Melissa Tagg — Kate Walker’s love life may have left her brokenhearted, but it hasn’t kept her from churning out made-for-TV romance movie screenplays…until a major career slump sends her running back to her hometown of Maple Valley. There she meets recently injured, and permanently sidelined, NFL quarterback Colton Greene, who is hiding out from the media. When an unexpected project gives Kate and Colton a chance to jumpstart their new lives, will they follow through? (Contemporary Romance from Bethany House [Baker Publishing Group])

Reclaiming the Cowboy’s Heart by Rose Ross Zediker — Donna crosses paths with her former fiancé, Jamie Martin, at Cheyenne Frontier Days, unprepared for the feelings that still endure after twenty years. As a former party boy, Jamie’s newfound faith could pave the way for a second chance at his first love…if Donna can find it in her heart to forgive him for almost destroying her family business so long ago. (Contemporary Romance from Love Inspired [Harlequin])

Memory Box Secrets (Coming Home Volume 2) by Brenda S. Anderson — Years after being abandoned by her parents, a successful sales executive receives a call from her father that he wants back in her life. (General Fiction, Independently Published)

The Lady and the Mountain Doctor by Misty M. Beller — When a hunting accident dashes a mountain woman’s hopes of ever becoming a genteel lady, can God use the new doctor to heal her wounded heart? (Historical Romance, Independently Published)

The Oregon Trail Romance Collection by Amanda Cabot, Melanie Dobson, Pam Hillman, Myra Johnson, Amy Lillard, DiAnn Mills, Anna Schmidt, Ann Shorey, and Jennifer Uhlarik — Nine romantic adventures take readers along for a ride on the Oregon Trail. Enjoy the trip through a fascinating part of history through the eyes of remarkably strong characters, who stop at famous landmarks along the way. Watch as their faith is strengthened and as love is born despite unique circumstances. Discover where the journey ends for each of nine couples. (Historical Romance from Barbour Publishing)

The Creole Princess (Gulf Coast Chronicles) by Beth White — During 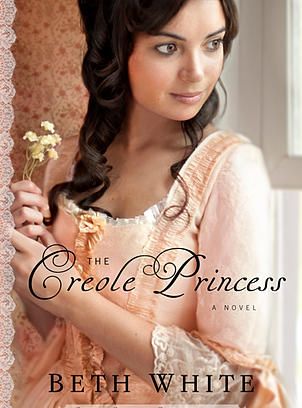 the American Revolution, Frenchwoman Lyse Lanier is best friends with the daughter of the British officer in command of Mobile, Alabama. Rafael Gonzalez is a charming young Spanish merchant with a secret mission and a shipment of gold to support General Washington. As their destinies become increasingly tangled, Lyse and Rafael must decide where their true loyalties lie–and save Lyse’s family from being executed as traitors to the British Crown. (Historical Romance from Revell [Baker Publishing Group])  (Look for my review next week.)

Buried Secrets (A Men of Valor Novel) by Irene Hannon — Former Chicago homicide detective Lisa Grant takes a job as a small-town police chief, wanting a kinder, gentler life. But the discovery of a human skeleton by a construction crew taxes her department’s resources. Enter backup, Detective Mac McGregor, an ex-Navy SEAL. As they work together to solve the mystery behind the unmarked grave, it becomes clear someone will stop at nothing to make certain a life-shattering secret stays buried. (Romantic Suspense from Revell [Baker Publishing Group])

Royal Rescue by Tammy Johnson — Hidden away for fourteen years, Thea James was presumed dead by most-killed in the fire that burned the royal palace. Thea’s new bodyguard, Ronin Parrish, knows she’s the only one who can clear his father of the king’s murder-and so does the killer. To a commoner like Ronin, the strong, beautiful princess can never be more than a mission, a race to restore Thea’s throne…before the murderer ends her reign forever. (Romantic Suspense from Love Inspired [Harlequin])

Presumed Guilty by Dana R. Lynn — Melanie Swanson lost her friends, her fiancé and her freedom when she was found guilty of a crime she didn’t commit and spent four years in prison. Police lieutenant Jace Tucker still believes Melanie is guilty-until she is repeatedly attacked and the people around her are picked off one by one. Melanie’s memories may help solve the crime she witnessed rather than caused-but proving her innocence could cost her life. (Romantic Suspense from Love Inspired [Harlequin])

Duty Bound Guardian (Capitol K-9 Unit) by Terri Reed — Art curator Lana Gomez’s life in on the line, and K-9 Officer Adam and his partner, Ace, must stop the assassin. As the danger escalates, Lana and Adam grow closer…but will they survive? (Romantic Suspense from Love Inspired [Harlequin])

Heir of Hope (Follower of the Word series, Book 3) by Morgan L. Busse — When the great city of Thyra falls, Rowen Mar, the last Truthsayer, is taken before the Shadonae. But the Shadonae are not who she thought they were, and now they want to claim her as their own. Caleb Tala, former assassin and prince, is now an exiled Guardian of mankind. He wanders the desert in search of his true identity. Rowen and Caleb must find their way through the shadows or the human race will be no more. (Speculative Fiction from Enclave Publishing)

Contemporary romances are hot now. Do you have a favorite genre? Which stories in the above list stand out to you?

Note: This list is compiled from those books registered by ACFW member authors on Fiction Finder and reprinted with permission of ACFW.

I have received no compensation for this post and have no material connection with any product(s) mentioned. Embedded links are strictly for the convenience of my readers. Any images came from the author links.

As an author of heartwarming historical and contemporary romance, Sandra Ardoin engages readers with page-turning stories of love and faith. Rarely out of reach of a book, she's also an armchair sports enthusiast, country music listener, and seldom says no to eating out.